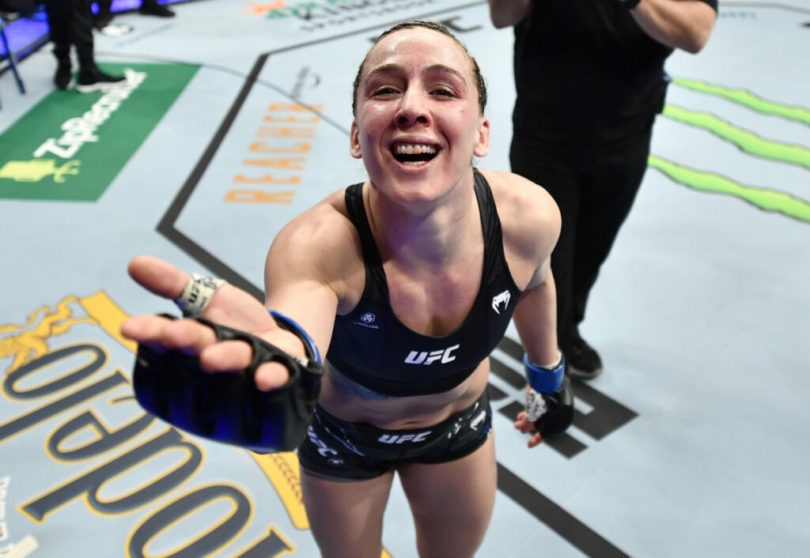 Manifesting is a word we have been hearing a lot in the past few years. It is all about using your thoughts and other techniques to create the reality you want. While not everyone believes in manifestation, those who do, see results like Vanessa Demopoulos did.

Her recent Saturday night went the way she planned it to go. She won the fight, a bonus, and Joe Rogan hoisted her up in the air during the interview post-fight. Yes, she manifested all of this.

Here is what you need to know about it.

The UFC 270 in Anaheim was the highlight of Demopoulos’s weekend as she made her second octagon appearance count. Demopoulos was fighting against Silvana Gomes Juarez, and she was dropped hard by Juarez’s right hand. The punch was hard, and Demopoulos agrees that she couldn’t remember several seconds after the punch, but she recovered and got her won.

After the fight ended and Demopoulos won, Rogan interviewed her. During this interview, she fell into his arms, and he hoisted her up just the way she imagined it to be. The sweeping moment was a cherry on top of Demopoulos’s already amazing day and win.

What Vanessa Demopoulos Has To Say

According to Demopoulos, she does a lot of positive affirmations and self-talk. During one of these talks, she kept telling herself that Joe Rogan would interview her, and that will be her moment. She also told herself that she would put one leg, then another leg up, and Rogan was just going to pick her up.

Of course, the best part is that her positive self-talk worked because that is exactly what happened after the right. The interview took place just the way Demopoulos imagined it to be many times. It was definitely Demopoulos’s moment, but everyone enjoyed this energy.

Demopoulos And Her Current Plans

The victory was excellent, and we are also interested to know what Demopoulos plans to do after this victory. According to her, she wants to fight at least four times this year. After all, giving such a performance is not easy, and people will want her back there too.

Demopoulos loves training, and she was going to go and compete in jiu-jitsu tournaments. However, MMA always comes first in her heart, and she will continue to fight after this victory. It has given her the energy she needs to take this path even further and fight even better next time.

Never underestimate the power of positivity because it can do wonders for your life. Vanessa Demopoulos is a big example of this as she consistently engages in positive affirmations and self-talk. That is what got her the victory and the moment with Joe Rogan post-fight.

So, if you also want to manifest what you want in life, be sure to follow these examples and learn from them. Once you do, you will also turn your thoughts into reality in no time.