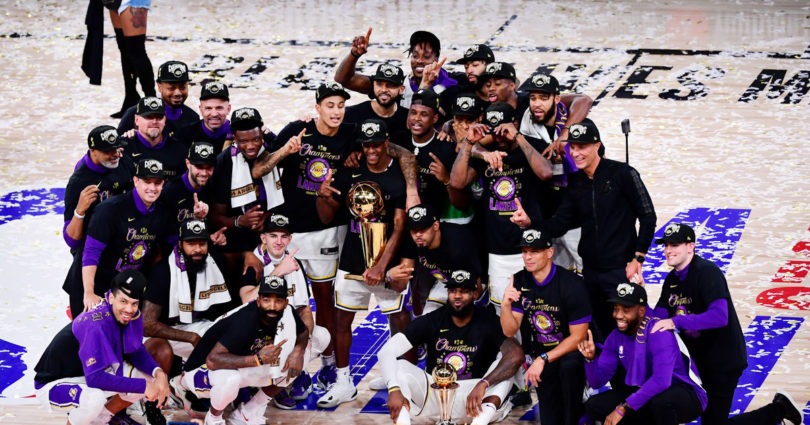 2020 was, for most, a year to remember for all the wrong reasons. Contagion and isolation were buzzwords of the year, as the whole world got used to dealing with masks, queues, and shortages. Still, one thing that continued on amid the madness was sport, and it often provided us with some truly special moments to remember. What, then, were some of the most important sporting moments to take place?

In a dark, challenging year, which athletes rose highest to give people back home a little slither of light and enjoyment in a challenging time?

Los Angeles Lakers do it for Kobe

Love ‘em or hate ‘em, the Lakers are a major sporting franchise. They are one of the biggest names in the world, a truly elite sporting institution. However, the loss of Lakers legend Kobe Bryant in a helicopter crash was a heartbreaking moment for the sport, but especially for the organization he represented with such passion.

So, it felt fitting that amid a year of political and medical turmoil that the Lakers went on to lift the 2020 NBA Championship in the bubble, whilst wearing their now-famous Black Mamba jerseys.

After watching the Lakers go all the way and create history, their baseball brethren decided to go all the way as well. They lifted the World Series of Major League Baseball for the first time in over thirty years as they lifted the trophy after winning against the Tampa Bay Rays, winning 3-1 in the sixth game of the series to claim the championship.

A truly special moment, it was a unique double for a city that has been through a hell of a lot of challenges in recent years.

When Tyson Fury stepped into the ring for his second bout with Deontay Wilder, most had the big Brit getting floored. Wilder had nearly finished him in the first fight, before an Undertaken-style rise from the floor led to a shock draw. However, the second fight was nowhere near as close; this time, Fury produced arguably the greatest boxing performance from a British fighter of all-time, absolutely leathering the US Heavyweight and winning with comfort.

A special moment for a unique personality, it left Fury as arguably the best active boxer in the world; can he go one better in 2021?

As one of the largest football clubs in the world, Liverpool Football Club had endured a title drought of epic proportions. Under the coaching of Jurgen Klopp, though, a five-year journey from mediocrity to becoming European and English league champions in the space of two years capped a special journey.

Though it was won without fans in the stadium, a 30-year wait ended and Klopp has done as he promised: he made the fans believe again, and turned the entire club from doubters to believers, giving a dark year a bright spot for Scousers around the world.