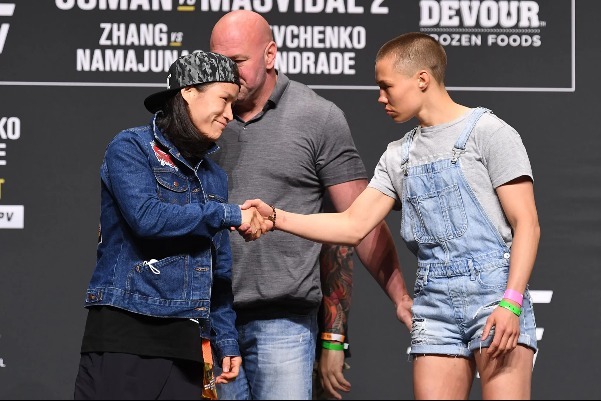 It is not easy being in the limelight as one needs to have thick skin to deal with all the haters and trolls online. Recently, Zhang Weili, a former strawweight champion, opened up about her mental health and defeats. It had taken a toll on her as she could not sleep or function normally.

Here is everything you need to know about Zhang’s recent struggles.

The first thing that affected Zhang the most was her defeat by Rose Namajunas at UFC in April. Zhang’s mind could not comprehend the loss, and because of this, she couldn’t fall asleep at night. Of course, the defeat wasn’t the only thing, as all the negative comments online following the loss were even worse.

The day after the match, Zhang did not sleep for more than twenty hours. The scenario of the defeat kept replaying in her head all night, which is why sleep would not come to her. Zhang lost the belt and was being hated by trolls online who started commenting many negative things after her defeat, which made Zhang feel she was being bullied online.

After reading all the negative comments and hate online, Zhang expressed to the head coach that she wished she has n old phone. It would allow her to stray from negativity and live in peace without knowing what the haters are saying. However, Cai (her coach) did not share this sentiment.

Cai told Zhang that she couldn’t live in her bubble, which is part of being in the limelight and the public eye. It is all about accepting defeat, and the hate with a smile on the face as people will always talk. Cai reminded Zhang that she had to not care about the comments and focus on being herself.

Zhang kept replaying the incident in her head, and every time she felt worse than before. Because of this, she told Cai that she wanted to start her training immediately. However, Cai thought this was not a good idea and that Zhang had to wait before training again.

Cai believed that it was futile to rush into training, and Zhang had to deal with all the anger and resentment from the previous loss in a healthy manner. Cai told Zhang that if she wanted to be peaceful, she had to accept the loss wholeheartedly, otherwise the resentment would show up in the fight and affect her performance. That is because anger can affect movement, which is why one needs to go into the fight without emotions.

It is nothing new for people to show hate towards celebrities, athletes, and other famous people. We hope Zhang deals with this defeat in a healthy manner and gets back in the cage soon. We are eager to see her come back and how well she does after going through such a loss and receiving so much hate.